Anyone who’s ever been camping more than a few times knows there’s a certain rhythm to it, a process that provides order to what is essentially going out of your way to take a nap in the middle of nowhere. And it’s a process (that can be divided into different sets of processes) you only really get the hang of the more you do it. For example, the first time I went camping on the beach, I was woefully unprepared for just how much sand would get into the tent. But over time, I learned the steps I needed to take to keep all that earth out of my sleeping bag. The first step? Don’t wear your shoes into the tent anymore, Daniel, you numbskull.

Laid-Back Camp isn’t an anime camping how-to guide, in the same way How Heavy Are The Dumbbells That You Lift? isn’t an anime personal trainer (though both shows are VASTLY different). But one thing I admire about it is how much it embraces the process, the little steps that, when added up, make camping way more fun, at least for me. A lot of this is accomplished by the show’s expert editing — blending close-ups of the materials and action shots of the tools in use in a way that goes past being a simple montage and instead is loving recreation. 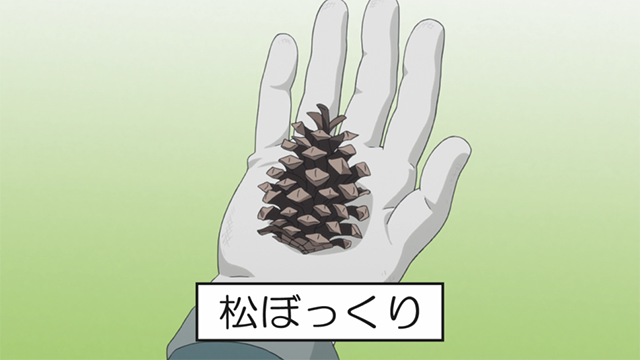 This is only enhanced by the way time passes on the show, naturally and almost unexpectedly. Dinner that is made in the late afternoon is only finished when the sun is setting. And as someone that has hiked all day and then realized, “Oh, I need to get this tent up because I don’t want to be fumbling around with a flashlight in the dark,” it’s pretty relatable.

It’s this process that keeps Laid-Back Camp from the trap of viewing camping as something purely nostalgic. It doesn’t go full-on Deliverance and become a cautionary tale about mankind’s inability to control the wild he’s so desperate to feel superior to, but it also doesn’t shy from some of its difficulties. Because while camping is the best, it’s also hard sometimes. When I was a little kid, and my Cub Scout masters did most of the actual work while I hit stuff with sticks and talked about Digimon with my friends, camping was just this fun thing that happened to me. The tent is put up? The food is ready? The sleeping bags are laid out? Awesome! Guess I can stop looking for toads for a minute and come chow down. 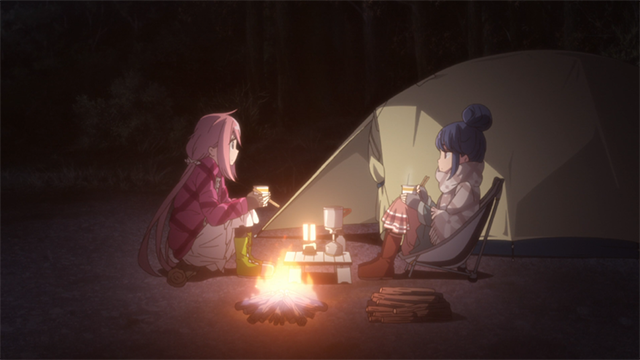 But as you grow up and your responsibilities grow, camping becomes more of a trade-off. You help get the campsite prepared and put up the tent and make the food so that eventually you can sit around a fire and debate Magic: The Gathering with your friends. And then, when you’re an adult, you have to buy all of the equipment yourself, along with doing all the other stuff, too, before you can gather around a campfire and drink and embrace over Digimon — growing up with Digimon and then thinking you’re too old for Digimon and then learning that, deep down, you’ve always loved Digimon and that it has always loved you is truly the Circle of Life.

This is all reflected in Laid-Back Camp, as the series finds the members of the Outdoor Activities Club having to get jobs to fund their trips. Nadeshiko has to get used to some of the camping trials that others immediately embrace. It’s work to pay for the opportunity to work to provide the opportunity to relax and experience nature, but as Laid-Back Camp shows us, that’s all part of the process. You’re rarely cooking pasta or finding kindling or setting up a tent on a windy day and suddenly think “My, this is so much fun!” It simply … is. It’s what needs to be done in the grand scheme of camping. I guess that’s why when you ask people about it, they tend to either embrace it or abstain from it entirely. Some people find comfort and, as I said, rhythm in the process. Others don’t.

I’ve spent a few weeks on the Appalachian Trail, a gorgeous hiking path that spans from Georgia to Maine. I’ve gone for various bits in the summer, the spring, the fall, and the winter, with each one bringing its own specific experience. One week in Northern Virginia during the summer brought nearly non-stop rainstorms, and I remember hoping that the wind wouldn’t pull the tent stakes out of the murky earth. One long weekend was spent during the winter in northwest North Carolina, and having somehow lost both pairs of gloves that I brought, I hiked around with my hands in my pockets, looking like I had decided to stomp through one of America’s greatest adventures, like, ironically. 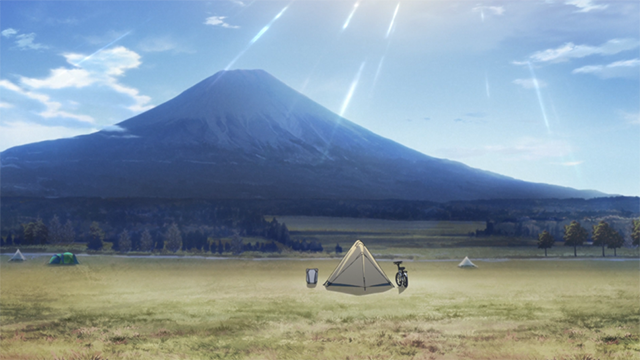 But what remained fixed was the process. The spot had to be chosen, the tools had to be brought out, the tent had to go up, and the food had to be made. And the next day, the camp had to be cleaned up and the materials had to be organized back into the pack, despite the fact that no creator of tents or sleeping bags has ever once designed their products to fit neatly back into their respective containers.

In the end, that’s what I think Laid-Back Camp does best (it also has wonderful characters and a terrific OP). It’s not about “roughin’ it” but it is about the preparation and the meticulousness. It doesn’t make me want to load up a pack and drive out to the woods because of its sunrises or its hot springs or its beautiful vistas (though those certainly help). Instead, it makes me realize that I, too, love the process. I love the work of camping, and all the steps involved. And I love the feeling of completion, and of looking at your campsite and thinking Ah. I’m so glad I did this.

Do you love writing? Do you love anime? If you have an idea for a features story, pitch it to Crunchyroll Features.